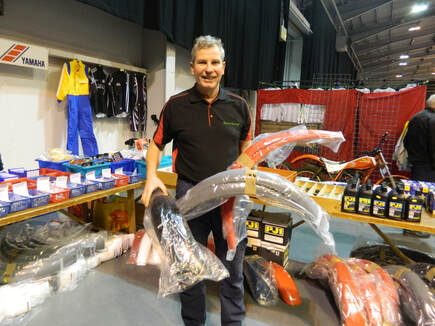 Established in 1982 Steve used knowledge and experience gained from working in the trade from the age of 14. Starting off as part time from school at Hyland Crowe Ltd in Birmingham in 1968, Steve was quick to learn the post side of the business and serving customers. Highlight of the week was when the Greeves lorry delivered spares to be sorted and put in to stock. Steve followed the Manager Bunny Ward to work again part time initially at Wakelin Ward, a partnership of Bunny and Roger Wakelin, taking up a full time position until Steve Goode Motorcycles was established in 1982.
Steve started with MZ Motorcycles, Simson mopeds, but within the first week a meeting with the Beta importer Harglo Ltd put Beta twinshock trials bikes into stock to promote, along with Garelli & Batavus mopeds. A move to larger premises in 1989 was needed to deal with other franchises which included Fantic, Yamaha Trials, Montesa, Aprilia,Beta under John Lampkin, Garelli Trials,Gas Gas and JCM.
MZ machines were slowing in sales and more expensive, so we decided to finish our connection, busy enough with trials.In 1991 a call to Moore Large for Puch spares ended up with entire stock of spares being bought!
Harglo Ltd directors Peter Glover and Wilf Harrison along with their wives Blodwyn and Dolly retired, so we purchased their stock of Italjet, Beta & Garelli trials spares adding Sandiford Beta stock of TR32 spares. In 2000 we made a move from Midlands to Castle Caereinion near Welshpool, but the business was hit hard by Foot and Mouth so it has been important to have more varied products. Whilst we continue with Beta, Gas Gas, Scorpa and Montesa we have spent more time to promote Puch, MZ,Simson, Tomos, Italjet, Garelli, Beta spares, breaking some bikes, OMG petrol taps imported by us, Stilmotor Trials Guards imported by us, Yamaha trials spares inc mono & TYZ. Steve has good knowledge of twinshock trials era and presently owns 50/125/200 Beta plus Garelli 320 along with other projects! Steve is assisted in the business by long suffering wife Jackie and input by daughters Lucy ,who will build our new website, and Amy. Steve is member of Clive MCC assisting with trials and Welsh National Rally plus life long member of Moseley AMCA assisting with Classic scramble and laying on Classic trial for BMCA.